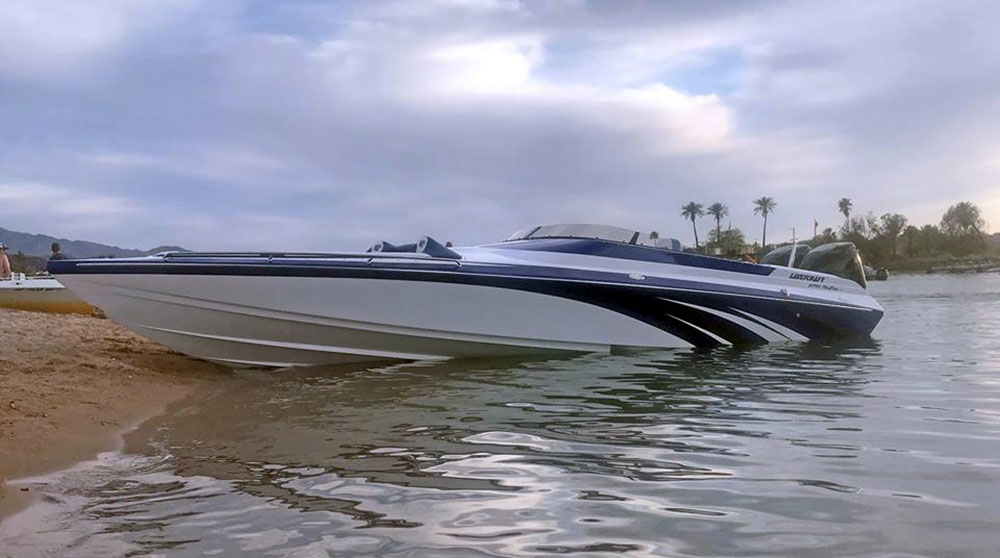 Add the latest performance boat from Lavey Craft Motorsports to a lengthy list of unique models to come out of the Corona, Calif., facility over the past few decades. Because it is the first outboard-powered Lavey Craft, Michael Drury’s 2750 NuEra that he took delivery of at the Desert Storm Poker Run in Lake Havasu City, Ariz., about a month ago is right up there with the 28 Evo-R canopied race boat that is still being campaigned by Team Woody as well as the largest, and arguably most beautiful, boat in the Lavey lineup, the one-and-only 39 Evo.

To say that the gorgeous 27-foot mid-cabin V-bottom, which is powered by twin Mercury Racing OptiMax 300XS engines, took a little extra work by the team at Lavey Craft would be bogus. It actually took quite a bit of time between the transom modifications and updates required at the helm to accommodate twin engines. Not to mention the learning curve that goes into setting up the first outboard-powered boat in a company’s lineup, especially when said boat has always been a single-engine inboard configuration.

Following all of the work that went into getting the boat to Lake Havasu so Drury and his wife, Melanie, could enjoy a few days on the lake before hauling it home to Mississippi to do their hometown Tickfaw 200 Poker Run (Osyka, Miss., is just north of New Orleans), the team at Lavey Craft was visibly proud to debut the new outboard-powered model at the Desert Storm Street Party. 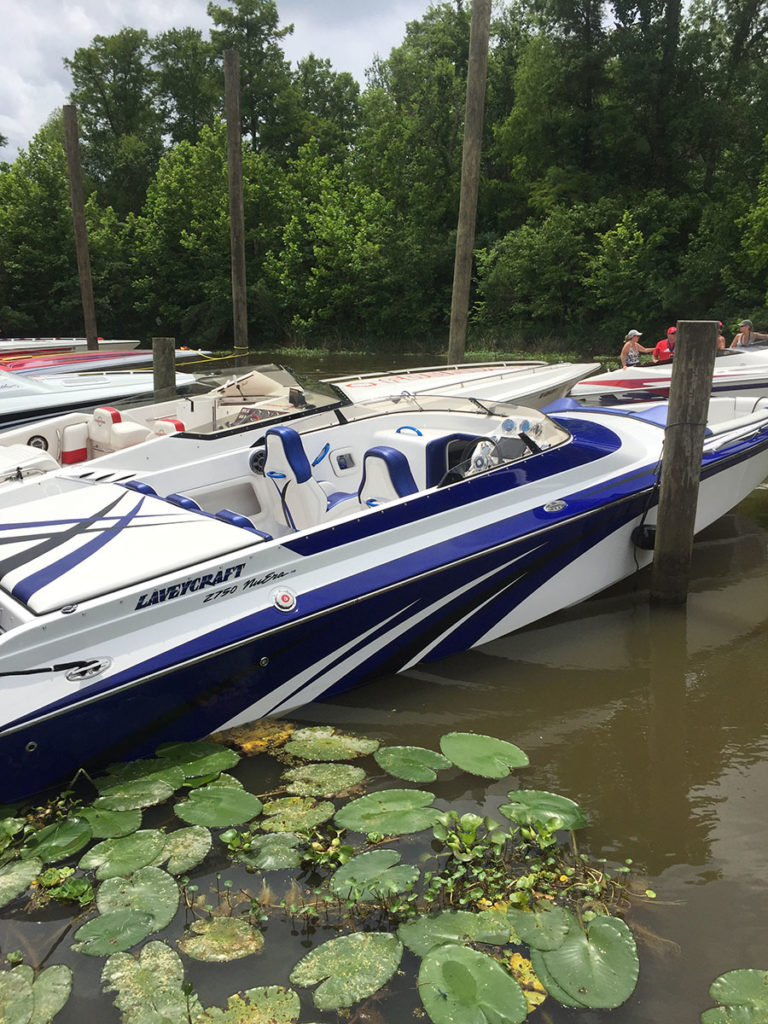 Call it the Lavey legacy, if you will. Chris Camire, who purchased the company in 1991 with his brother, Jeff, still runs the company, and his son, Christopher Camire, who is an officer in the U.S. military, is a part-time member of a talented team that includes Chris’ brother, Ron, and a dedicated crew ingrained with the same attention-to-detail philosophy as its owner and the visionary who started it all in the ’50s—Al Lavey.

“I love this boat—it came out so cool,” said Chris Camire, who recently partnered with Joe Malich to start producing the RPM by Lavey Craft Motorsports 26 Redline catamaran that can be configured with inboard or outboard engines. “I wasn’t sure about doing it at first. Originally the owner called me and asked if we could build one with twin small blocks. Then he called me and explained that he’s really an outboard guy—even though he was looking to downsize from his 35-foot Donzi—and wanted to see what I thought about doing outboards. I told him I’d been wanting to try them. Needless to say, when you look at all of the modifications that went into this, I think the outboards are pretty awesome with this boat.”

Camire admits he was nervous the first time he put the boat in the water. And while he hung the engines a little low to start, with guidance from Mercury Racing’s Mike Griffiths, he moved them up one inch and found a sweet spot.

“The more I drive it, the more I’m convinced the boat feels better with twin outboards than it does with a single inboard,” Camire said.

Drury, who said he enjoyed showing off his new ride in Louisiana, has been impressed with the boat’s performance as well as its workmanship. 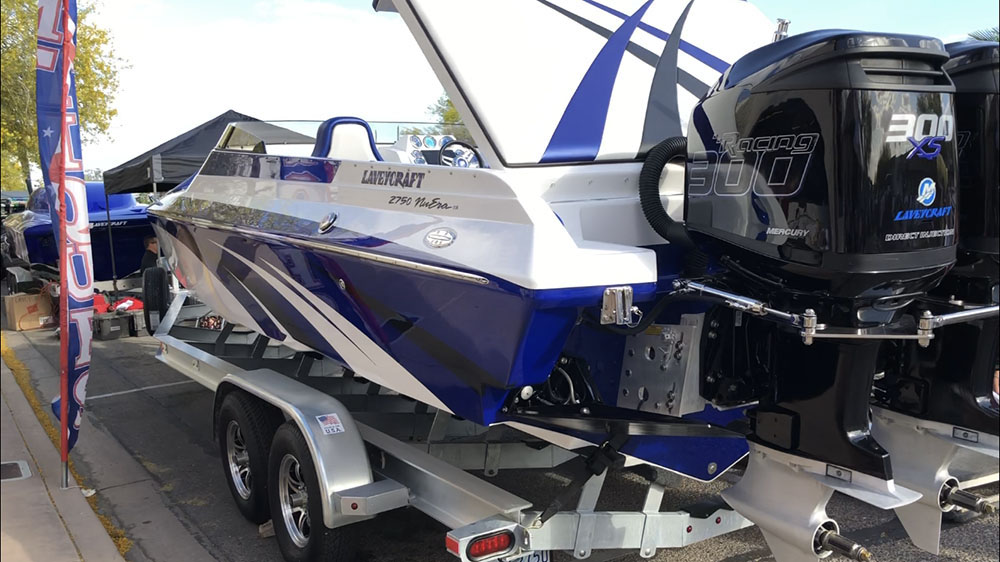 “I knew Lavey built a quality boat, but they exceeded my expectations,” said Drury, who also owns an outboard-powered 20-foot Allison. “When I looked up the Lavey 2750, I saw the same hull had won two world championship races so I figured it was fast—I like to go fast—and could handle rough water—we do a lot of boating in the Gulf Coast. To experience the passion that their team has was amazing. And the customization that they offer is incredible. You can have almost anything you want. I wanted an all-fiberglass floor, no carpet, because it rains a lot here and carpet just gets destroyed, and they took care of it.”

Drury, who said he’s still testing propellers for the boat but has reached a top speed of 88 mph so far, said one of the best parts about his new boat is the friendship he’s made with the people at Lavey Craft.

“They’re regular people who treated me like I meant something to them—that goes a long way in my book,” Drury explained, adding that he’s enamored with the boat’s expertly applied gelcoat graphics and its chest-thumping Bluave Marine Audio system. “We had a really good time at Tickfaw. The boat ran great and there were so many other cool boats to see.”

Drury said he plans to take his new boat to the Emerald Coast Poker Run in Destin, Fla., in August, the Patriot Poker Run in New Orleans in September and the Key West Poker Run in Florida in November. He said he’ll also be running the Tickfaw River area all summer so keep an eye out for the latest unforgettable Lavey Craft.