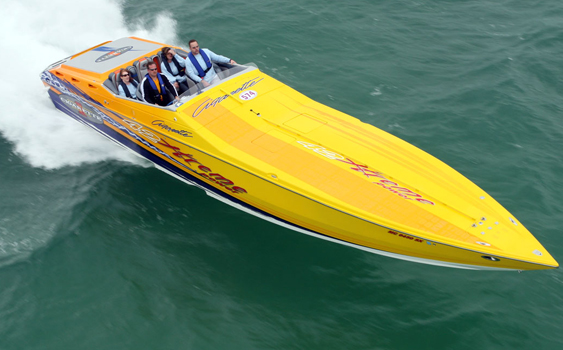 While doing research for an in-depth feature on Chief Performance for the next issue of Powerboating in Paradise magazine, I was introduced to Dave Postill, the owner of a 2007 Cigarette Racing 42X who lives in Florida with his wife, Laura. Through a recommendation from Stu Jones, president of Florida Powerboat Club, which publishes Powerboating in Paradise and organizes next month’s Key West Poker Run, Postill turned to Tommy Hofstetter and the crew at Chief Performance in Fort Lauderdale, Fla., to handle a significant repower of his 42-foot V-bottom.

Previously propelled by twin Mercury Racing 850SCi engines and No. 6 drives, the boat was de-rigged earlier this summer as Postill opted not to rebuild the supercharged engines, which had 400 hours. Instead Chief Performance stripped the mechanical components throughout the boat to make room for a new set of Mercury Racing 1350 engines and M8 drives with Digital Throttle & Shift technology.

“To me it made sense to start over with brand new power, especially with the advancements made in technology,” Postill said. “Don’t get me wrong, the 850s have been great—I’ve run the boat in many poker runs and we’ve had a lot of good times thanks to those engines. But with the one-year warranty and the chance to have the most advanced technology available, I couldn’t resist.” 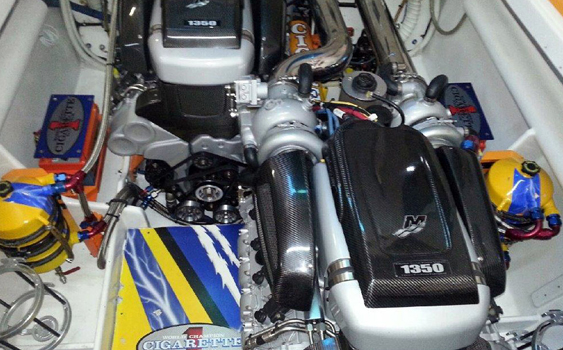 Twin Mercury Racing 1350 engines are expected to give the 42-footer a substantial gain in performance. (Photo courtesy of Chief Performance.)

The repowered 42X—one of a couple of cool Chief project boats I’m looking forward to seeing in Key West along with Dr. Robert Rosenberg’s 1991 Cougar 38-foot catamaran that has been repowered with twin 1,350-hp turbocharged Chief engines—is nearing completion and is expected to be on the water in a couple of weeks. 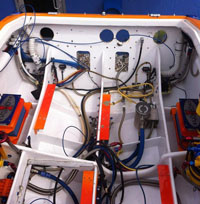 With a 500-hp per engine increase, Hofstetter recommended that Mystic Powerboats owner John Cosker examine the bottom of the boat and make sure it was equipped to handle the additional 1,000 hp. The Mystic team is wrapping up some bottom modifications that include better step alignment and altering a few design elements.

With the bottom work being taken care of, the engines were sent back to Mercury for assessment and are expected to arrive at Mystic next week in time to test drive heights, propellers and more to get the setup just right for Key West.

Postill, who admits the project was a big undertaking, said he couldn’t wait to get out on the water and participate in the poker run with his “new” boat, which he expects to be smoother and more efficient, not just faster. Along with the top-notch installation of the engines, drives, exhaust, rigging and wiring system, the crew at Chief dropped in new carpeting, upgraded the LED lighting and added bow thrusters to the boat.

Calling the project challenging, yet rewarding, Hofstetter said business at Chief has been very steady lately with a variety of repower jobs—although not all are as comprehensive as Postill’s boat—to complement the service work that comes with being a Mercury Platinum dealer. 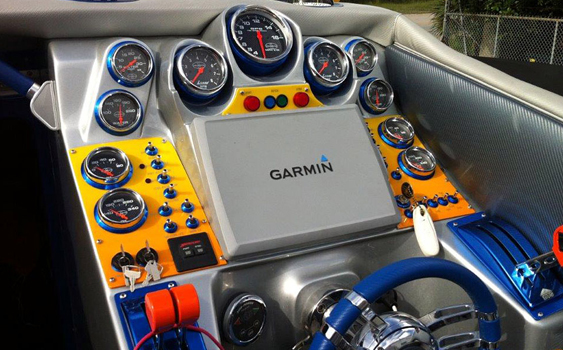 The main difference in the helm is the new Digital Throttle & Shift controls on each side of the steering wheel. (Photo courtesy of Chief Performance.)

“Between building motors, rigging boats, the concierge service and getting to as many poker runs as possible, we’ve been overwhelmingly busy,” said Hofstetter, who founded Chief in 1991. “We’ve been doing a ton of Mercury rebuilds on the 525, 700, 850 and 1075 engines. The rebuild and service business has really come alive, so have the full repower and re-rig projects.”

Hofstetter is surely going to be busy before, during and after the Key West Poker Run. Hopefully he’ll carve out some time for me to get a closer look at Postill’s 42X as well as other customers’ boats so I can report back with more information and photos.