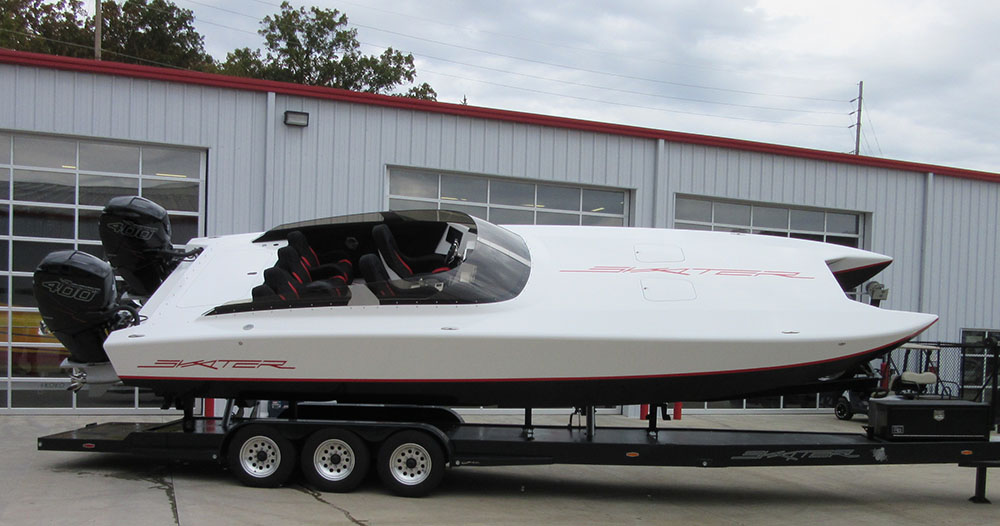 Skater’s third 318 catamaran to hit the water was rigged at Performance Boat Center, the Missouri dealership that sold the boat.

If you know Brett Manire of Performance Boat Center in Osage Beach, Mo., you know that he can talk fast and with significant enthusiasm. I’ve heard it in various forms over the years from an interview the day the company he co-owns with Mark Waddington broke ground on their new facility to chatting with him minutes after the company’s Skater Powerboats 388 raceboat competed in its first race at the 2014 Super Boat International Key West World Championships.

That same level of excitement was present in Manire’s voice last week when he was telling me about the new Skater Powerboats 318 catamaran Performance Boat Center just delivered to a customer in Key West, Fla. The 31-foot cat, which is powered by twin Mercury Racing Verado 400R engines, is the third Skater 318 to hit the water. 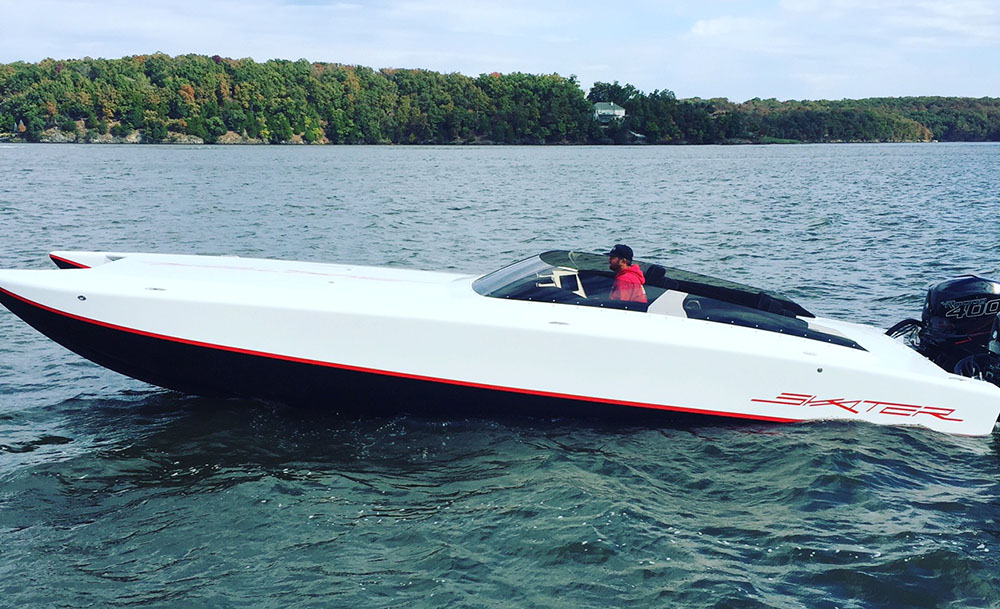 A pair of Mercury Racing Verado 400R engines supplies the power to the 31-foot Skater.

“We got the bare hull with the windshield and the engines and jack plates from Skater about three weeks ago and our goal was to get it done for the owner to be able to use it during Fantasy Fest,” Manire said. “Andy Sanders rigged the boat in house and installed the JL Audio/Fusion stereo, the custom side panels and the SeaDek flooring. Skater handled the interior, which turned out great, and sent it down for us to install.

“We added a simple red decal strip to the boat for now and a few Skater logos that match the one in the flooring,” he continued. “We are developing renderings now for the paint job we’ll be applying to the boat in the spring so that it’s ready for its first season on the lake.

Manire said after a couple of days of water-testing the boat on Missouri’s Lake of the Ozarks to make sure it was ready to make its debut in the Florida Keys, Performance Boat Center’s Myrick Coil got it up to 117 mph with Mercury’s stainless-steel MAX5 propellers. He said the owner might opt for a new set of Mercury CNC props to get it to run even faster, but that’s for another day.

The overall feel of the Skater’s black, gray and red cockpit is remarkable.

“I’ll tell you what, this is a sweetheart of a boat—we were cruising at 100 mph and talking totally normal to each other,” Manire continued, adding that he got a chance to sit in the first 318 at the Miami International Boat Show in February but never had the opportunity to drive one before last week. “We were running around in some rough water and the boat is almost idiot-proof up to 100 or 110 mph. It was such a joy to drive. At 80 mph it seems like you’re at idle it’s that smooth and quiet.”

The boat’s owner, who has owned multiple cats, is planning to use it quite frequently on Lake of the Ozarks, and Manire thinks he made an excellent choice.

“He’s going to love it—the 318 is a great boat for this lake,” said Manire, who added that Performance Boat Center has at least two 31-footers already sold and maybe four if a couple of potential deals come through. “It’s such a good-looking, fun-riding boat. We were able to cover some ground really quick in it.”