You are at:Home»Awesome»Love and Legacy 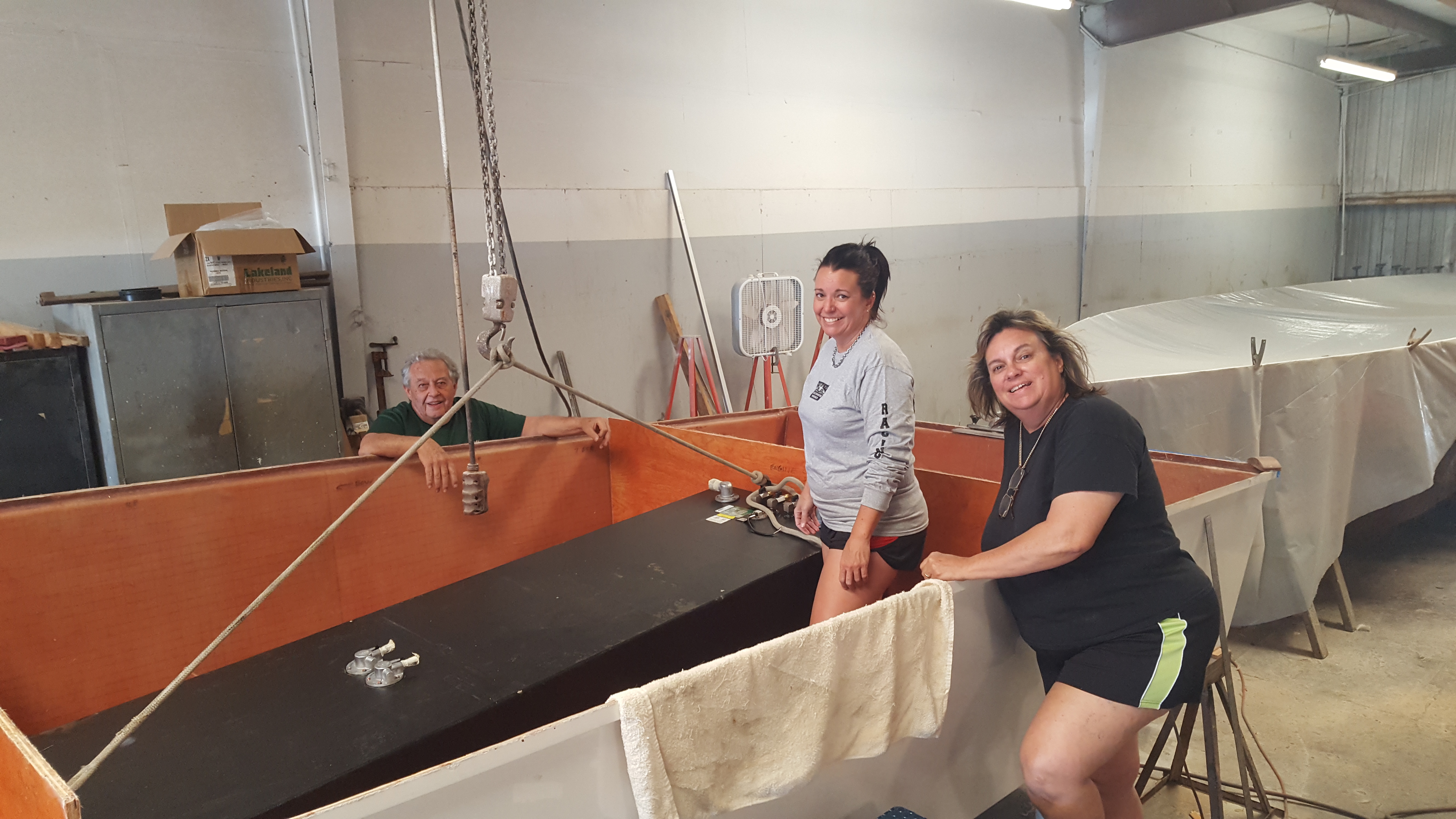 (From left) For Richie, Meri and Christine Sutphen, boatbuilding always has been a family affair. All photos courtesy Sutphen World Champion Powerboats LLC.

Dominant in offshore racing’s Production V-bottom classes during the 1980s, Sutphen World Champion Powerboats LLC gradually drifted—like the classes that made the brand a household name among the racers and their fans—into obscurity during the 1990s and 2000s. Demand for company founder Richie Sutphen’s conventional V-hull offerings dropped even further with the rise in popularity of stepped V-bottoms, and the recession of 2008 accelerated the Cape Coral, Fla., company’s decline.

As it happened, Sutphen was perfectly positioned for a major slowdown. He owned the tooling for his 31-, 34- and 40-foot models, as well as the facility in which he built them. He had no debt to lenders or vendors. He could wait out the recession and the tough years that followed it and return to building boats when the market improved. Or, with what he estimates to be 1,000-plus custom boats to his credit, the 75-year-old builder could sit back and enjoy retirement.

And had Meri Sutphen, his 40-year-old daughter, not decided get involved, he might have done just that. “When I started to show an interest, that relit his fire so to speak,” said Meri, who has been watching her father build boats since she was a child. “I have come on board part time to learn everything and build alongside him, build the business and bring it to the forefront. Sutphen has been a name for a long time. We want people to know that we are still around. 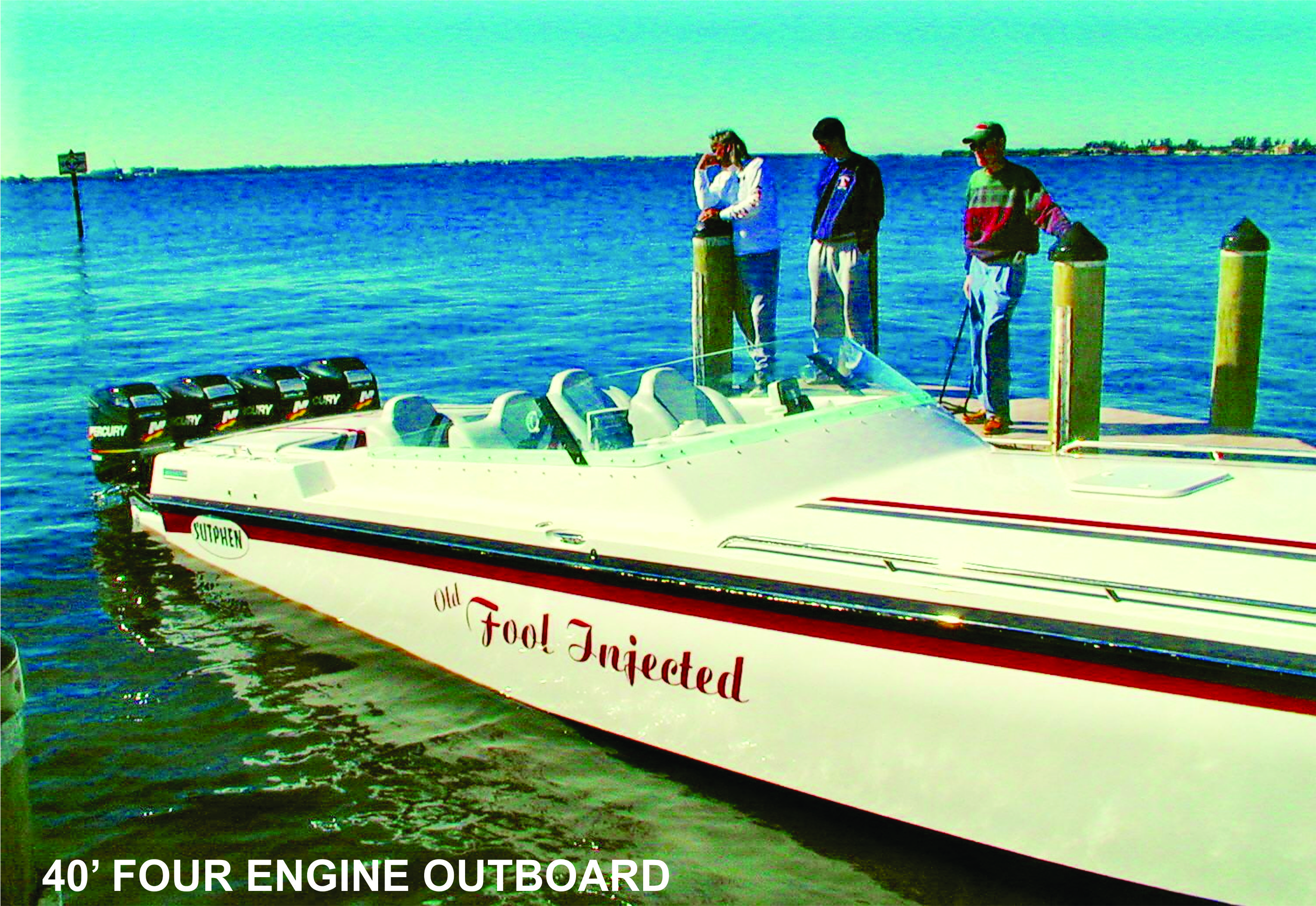 “The first time I was on a boat, I was one week old,” she continued. “I went to work with my parents. Our family vacations were going to offshore races and the hydro circuits. That’s how my life was. I went to college, got a degree as an artist, and I started my own shirt screen-printing business out of the shop—my dad has a ton of square footage. He was helping me, and I sold the business. I got burned out.”

Her timing was perfect.

“I was waiting for someone who wanted to come along and give me a hand,” said Richie. “And my daughter said, ‘Hey dad, how about me?’

Restoration projects have already started coming back to the company, according to the father-and-daughter team, and they’ve begun building a new outboard engine-powered 34-footer for a customer in nearby Fort Myers, Fla., who already owns a 34-foot outboard-equipped Sutphen built 30 years ago. The company also has a new 40-footer based off its existing 40-foot hull—but with a new deck—in development.

Sutphen’s offshore racing pedigree is as good as they get.

“We have the tooling almost finished,” said Richie. “We’re just waiting for our first order.”

Sutphen said that because he builds his boats “from scratch,” he’s willing to work with buyers on new deck designs and interior styling for his existing models. What he won’t do, however, is go the stepped-hull route.

“We have proven the stability in our hulls, whether built for weekend fun or race conditions, over the course of 50 years of production,” he said.

He also won’t tackle restoration jobs on any brand other than his own.

“I just want to work on Sutphens,” he said. “I know how the boats are built and how to go about it. I have so many boats out there that people are calling for me to do everything from replacing fuel tanks to soggy transoms.”

On the new-boat side of his business, Sutphen said he’d like to eventually build 10 to 12 models a year. He wants to rebuild the company slowly and carefully, and he’s in no hurry. Although he will be willing to produce offshore raceboats, he’ll focus on high-performance pleasure boats.

Like her father, Meri wants to grow the business methodically. She’s taking small steps to that end such as, most recently, rebuilding the company’s website. But she also has ulterior motives.

“This is what keeps my dad young,” she said. “Every day, he gets up and goes to work—it’s all he knows. I really want to see him have that second time around, that ‘second glory.’ Back in the 1980s, we were big.

“Plus, there aren’t a lot of women involved in this business, much less fathers and daughters,” she added. “You see fathers and sons, but not fathers and daughters. My mom, Christine, has been here since day one and she still handles all the office stuff. At one point, we had a huge crew of people and we slowly want to build that back up. We still own everything, the building, all the tooling, everything. We’re still around, and the sky’s the limit.”