You are at:Home»Awesome»Old Hickory Still Ascending

This time last year, Old Hickory Fun Run, Raft Up and Pub Crawl organizer Chad Collier had 75 to 80 boats signed up to participate. He ended up with a 145-boat fleet. 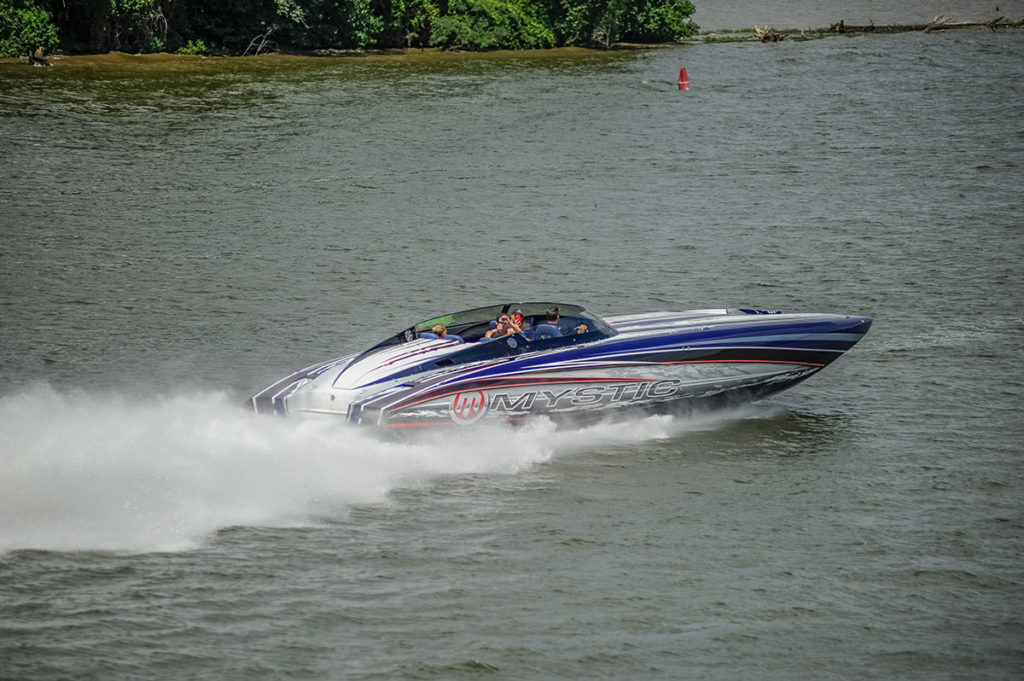 The organizer of the Old Hickory Fun Run for the past five years, Collier owns a 44-foot Mystic catamaran powered by Mercury Racing 1350 engines. Photos by Devin Williams.

Right now, the roster for the sixth annual July 27-28 event presented by Kia of Murfreesboro on Old Hickory Lake about 20 minutes outside of Nashville is sitting pretty at 106 boats—and Collier is working through his second block of hotel rooms for the Tennessee Powerboat Club-backed event.

“I don’t know if everybody just signed up early or if we’ll end up with 175 boats,” he said, then laughed.

Based on the tendency of more than a few poker run participants to sign up at the last minute—as any poker or fun run organizers can attest—a record-setting Old Hickory fleet is a lot more likely than a lot of people having planned ahead.

As it has for the past three years, the event raises money for Operation Stand-Down Tennessee, a nonprofit veterans’ services organization. Last year, the run raised approximately $50,000 for the outfit. Collier, who owns a 44-foot Mystic catamaran called Habitual with his wife, Heather, is shooting to top that this year.

“With Operation Stand-Down Tennessee, 86 cents of every dollar goes to the veterans,” he said. “We are 100 percent volunteers. No one involved gets paid. Any money we don’t spend feeding people or on venue goes to the charity.”

While Saturday’s fun run is relatively short, its raft-ups on Friday—after a brief lunch run—and Saturday are simply massive, Collier estimates that between the event’s group and local vessels in the area Saturday’s raft-up on the lake will be 400 to 500 boats strong.

The Friday and Saturday raft ups are a big—literally and figuratively—part of the event.

“We look forward to having a good, safe event,” he said. “We put everyone in groups based on the capabilities of their boats. Each group has a pace boat. You’re not allowed to leave your group—or pass the pace boat. That kind of prevents the throttle-jockeys from coming here and running their boats too fast. There are a lot of shallow areas in this lake, and if you don’t know where you’re going you can get into trouble.”

For those who arrive in town Thursday, there’s a rooftop bar party scheduled in downtown Nashville that will be hosted at either country recording artist Blake Shelton’s new Ole Red venue or Honky Tonk Central—Collier and Steve Smith, a Nashville bar owner who helps him organize the following evening’s pub crawl, are still finalizing those details. As for the pub crawl, Collier has added a new wrinkle.

“There are six stops in the crawl,” he said. “Everyone registered for the run gets a lanyard. We’ve giving each bar a special key punch. If you get your lanyard punched at each bar—you need six punches and we made them all different so no one can cheat—you get a free extra poker hand on Saturday night.”

And that brings Collier full circle to the event’s mission, to raise money for Operation Stand-Down Tennessee. The Saturday night awards dinner at the Blue Turtle Bay Marina host venue includes a live auction, a silent auction and—of course—the poker hands being played. While the organizer already has collected items for the silent and live auctions—including 10 seats in his own suite for a Nashville Predators National Hockey League Game—he’s still looking for more.

“The auction is open to everyone, not just participants in the event,” said Collier. “And everybody’s money is good.

“We’re still looking for people who have ‘experiences’ they’d like to auction off, and people who know celebrities and athletes who can supply memorabilia to auction,” he continued. “A few years ago we auctioned one of Dolly Parton’s guitars. I think that brought in $16,000 or $17,000. Anybody who has something of value to contribute to the auction, we’d love to have it. Because it’s all about the charity.”