In various stages of development for the past few years, things got real—so to speak—for the new canopied 32 Phantom single-engine raceboat when Florida-based businessman Jorge Arellano ordered 10 of them from company principal Will Smith this spring. Smith, who is based in Sarasota, Fla., received the finished hull mold for the two-step 32-footer from High-Tech Composites LLC/Doug Wright Boats in Melbourne, Fla., and got to work on the first build of the 10-boat run. 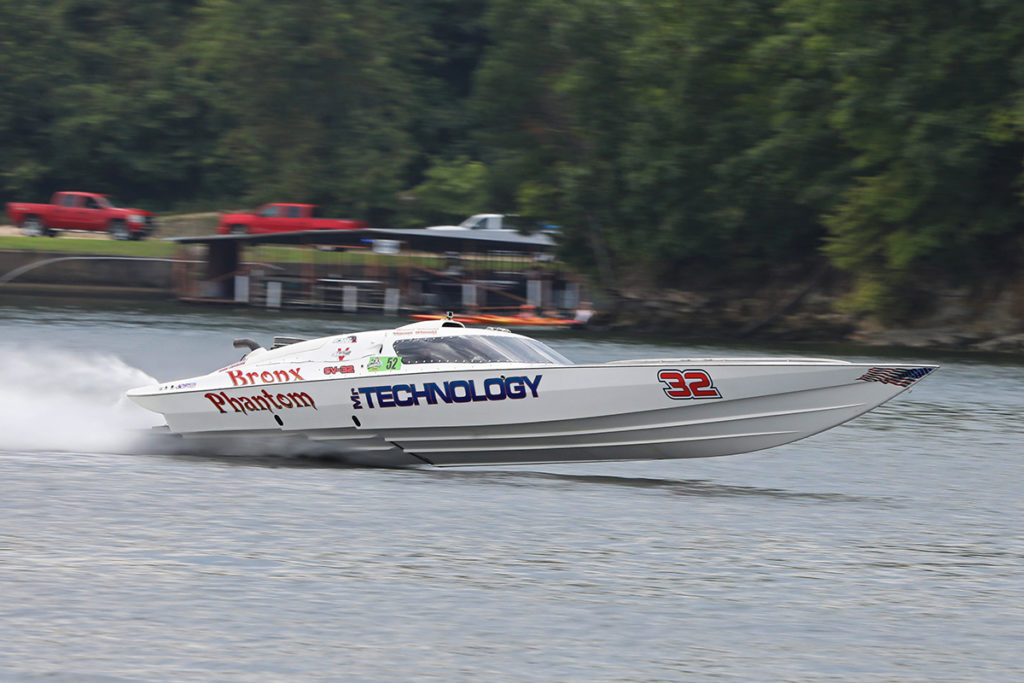 Bronx Phantom didn’t just reach 120 mph at last weekend’s Lake of the Ozarks Shoot—it reached an entire audience of performance-boat enthusiasts that otherwise might not have seen it. Photo by Jeff Helmkamp/Jeff Helmkamp Photography

And now, the first 32 Phantom in the new series is ready for its windshield installation and should be heading to rigging sometime later this week. While he admits it’s an ambitious goal, Smith said he’s hoping to have that boat ready to run in the Super Boat International National Championships Sept. 28-30 in Clearwater, Fla.

But if it doesn’t happen, Smith will run Mr. Technology, his original 32-footer—the one that started the entire program—in the SBI contest. With Smith behind the wheel and Jimmy Deitch on the throttles, that boat finished first in its class against strong competition including the Sun Print Management, Boatfloater.com, Phantom 9 and LSB/Hurricane of Awesomeness teams during the Sarasota Powerboat Grand Prix in July.

The Sarasota win—the first offshore racing victory for the 32-footer—provided good publicity for the boat. But a few weeks ago, Smith decided to go for a little more. So he loaned his Phantom 32 to longtime customer Robert Winoski of Harrison, N.Y., for the 30th annual Lake of the Ozarks Shootout last weekend.

“I stripped the boat of the 509-cubic-inch engine I built and the drive, and sent it to him with the headers, motor mounts, bell housing and drive line,” he said.

A veteran offshore racer, Winoski is no stranger to the Phantom raceboat brand. He bought the first 30-footer built in 1995 and currently owns a triple outboard engine-powered Phantom 29, a pair of 34s and one 30. In In a nod to his old New York City neighborhood roots, he’s called his various teams Bronx Phantom.

Once the stripped 32-footer arrived in New York, Winoski and his son, Vinnie, had about a week-and-a-half to rig the boat with a supercharged 1,200-hp Teague Custom Marine engine and IMCO drive with an SCX upper and unit SC lower unit before they had to leave for the Central Missouri top-speed contest

“It wasn’t exactly ‘plug and play,’” Winoski said, then chuckled. “But I wish it was. We had to replumb all the fuel and water systems, install the drive and a whole lot more. There was a lot of work involved.

“We really didn’t even have time to test,” he said. “There was a lot of rain and wind in New York the week before we left.”

From there they began the 1,159-mile, 18-plus hour haul to the Lake of the Ozarks. On Saturday, the first day of competition on the three-quarter-mile course, they made four passes—the best of which was 120 mph—before an MSD ignition box issue sidelined them for the weekend.

Robert drove. Vinnie throttled. And the father-and-son duo had a ball.

“It was first time competing in the Shootout, and it was awesome,” said the senior Winoski. “The boat was rock solid. We did four runs—we turned and burned—before we had a problem with the box.

“I wish we were a little faster, but I was very happy with what we did in the time we had to do it,” he continued. “I think the boat will do close to 140 mph in good conditions. There’s a lump in the water about halfway through the course—a lot of people felt it—and we had to back off at about 105 mph. After that, we stomped on it.”

Like Winoski, Smith said he thinks the Teague Custom Marine 1200 engine-powered 32 Phantom could reach 140 mph in the right conditions. With its class-specification 600-plus-hp engine, the boat tops out between 95 and 100 mph, he said. But the best part of the V-bottom’s performance could be its ride quality and handling manners.

“It’s very friendly, kind of like that ‘Can you please pass the Grey Poupon?’ commercial,” he said. “It has like for or five more feet of running surface than the rest of the boats in its (single-engine V-bottom) offshore racing class.”

The only question remaining is which 32 Phantom, the boat that won in Sarasota and ran admirably at the Lake of the Ozarks Shootout or the brand-new one headed to rigging later this week, will compete in the Clearwater contest in late September. Either way, Will Smith is cool—and confident.