On top of preparing nine boats for next week’s Los Angeles Boat Show (Jan. 9-12) held at the Fairplex in Pomona, Calif., the crew at Nordic Boats in Lake Havasu City, Ariz., had been hard at work on a new website, which launched today. 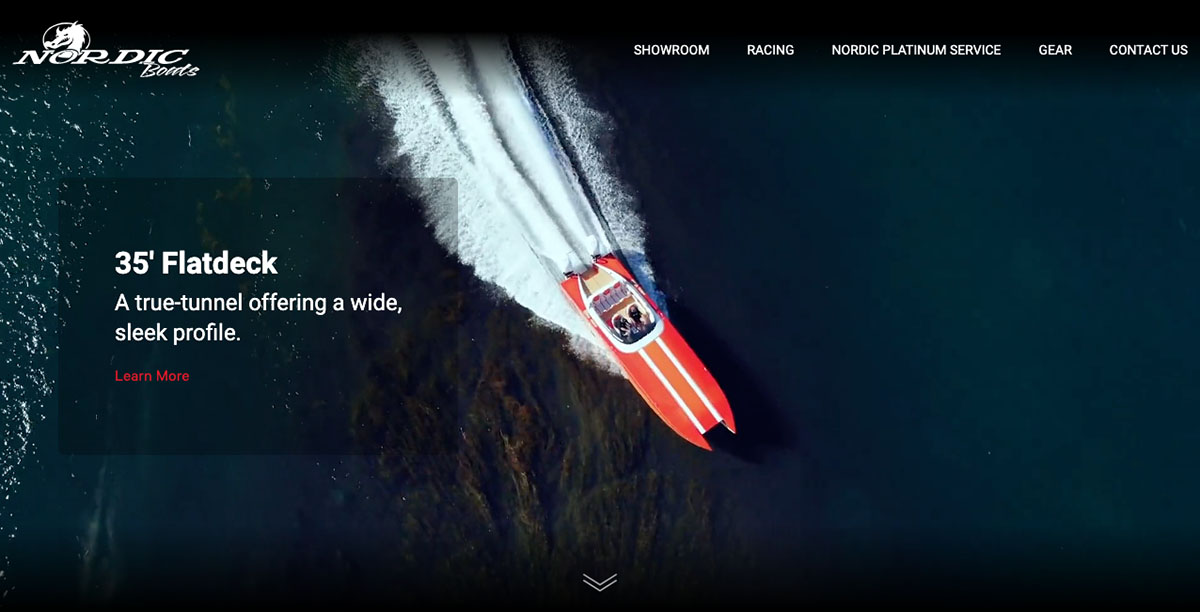 The new website for Nordic Boats is pretty slick.

Featuring a comprehensive look at the builder’s wide-ranging lineup of boats, information about the company’s Platinum service center, a brief overview of Nordic’s racing heritage and a link to the official shop for Nordic gear, the website is very well done. Welcoming visitors is a cool video of the company’s demo 35 Flat Deck model with twin Mercury Racing 400R engines that was sold to a customer a few months back.

I have to admit I was sucked in and watched the whole montage, which was produced by Havasu Media Productions. Then I clicked around on the site a little bit. I was impressed with the details provided with each model Nordic offers. Not only are the specs, features and options provided, but you also can see more pictures, download a brochure or request a quote. My favorite part was the scrolling numbers that climb up to the length, width, weight and fuel capacity of the model you’re looking at—I thought that was a neat feature.

Get a load of the new 48 Poker Run V-bottom that Nordic is going to have on display next week at the Los Angeles Boat Show. Photos courtesy Nordic Boats

But let’s get back to the boat show, the spot which Nordic plans to unveil two new boats on completely opposite ends of the spectrum—its 31 Flat Deck catamaran and its 48 Poker Run V-bottom. Nordic’s general manager Thane Tiemer shared a few sneak-peek pictures of each model with me, but he wants me and others to wait to see the finished products in Los Angeles. I don’t blame him.

Along with the highly anticipated 31-foot twin outboard-powered cat and 48-foot V-bottom, which has twin Mercury Racing 1100 engines for power although it’s not completely rigged so it won’t hit the water for a few more weeks, Nordic is going to have a 25 Rage, a 35 Flat Deck, a single Mercury Racing 450R-powered 21-foot V-bottom and a couple of its popular deck boats on the show floor. Nordic’s sister company Hallett Boats is going to have two boats on display as well—the company’s newest model, a 275 with a single Mercury Racing 520 engine, and one of its new 255 V-bottoms.

I’m sure I’m not the only one, but Thursday can’t come soon enough. Pomona, here I come.