You are at:Home»Boating»Are Boat Tests Dead? 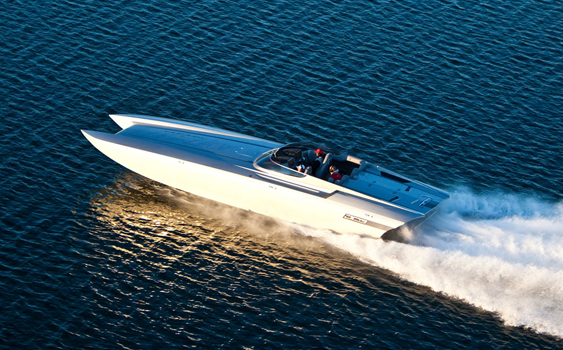 The new M-41 Widebody catamaran from Dave’s Custom Boats will be on display next week at the 2013 Miami International Boat Show. Dave Johnson recently reviewed it.

In the 15-plus years I worked for Powerboat magazine, I wrote roughly 70 percent of the Performance Reports, which was Powerboat-speak for boat tests. So whether you loved them or hated them—and there was plenty of both to go around—you most likely loved or hated what I spent many hours writing.

And the writing was the end-product of logging many hours on the water with test drivers Bob Teague and John Tomlinson, then poring over rating booklets and numbers from top speed to time to plane, reading and re-reading hours of tape transcriptions—something like two hours of taped talk per boat—and page after  page of manufacturer-supplied specifications. My mission with up to ten boats per issue? Take all of that information and find a way to distill it into 900 compelling words in a format that was anything but compelling.

So it’s no wonder that, in the words of my friend Dave Johnson of riverdavesplace.com, that they often read like the same review “over and over again.” Some of that sameness—I prefer consistency—was by design. Regardless of what you write in a boat test, someone—likely its manufacturer or an owner of the model in question—will be unhappy. That’s not an opinion, it’s a time-tested fact. So the consistency was a choice we made based in what we believed was, and I still believe is, fairness.

But damn, it made for some boring reads. The kind that make your eyes bleed.

So where am I going with this? I mean, Powerboat is dead and Sportboat (also recently deceased—note to self, tell the editor at offshoreonly.com to change my bio to “former editor” of Sportboat) never did boat “tests.” The only go-fast boat magazine left doing them—the only go-fast boating magazine left, period—is Performance Boats, and I have to say they do as good a job as can be done in the print world. They have knowledgeable people testing the boats, the tests are well written and they don’t follow the stale, cobweb-crusted Powerboat magazine format. 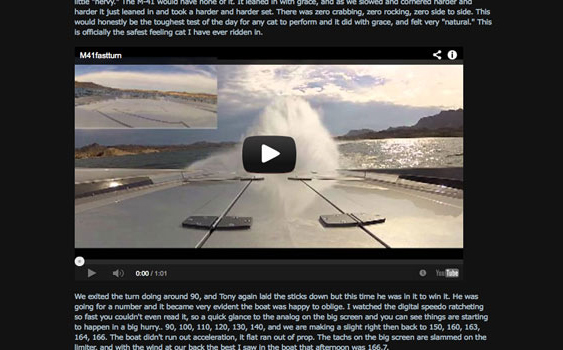 Throughout his story on the M-41, Johnson used video to support the key points he made.

Still, my buddy Dave Johnson got me thinking with the recent “DCB M-41: Story of the First Ride” feature on his site. Johnson, who writes with a nice conversational tone, is not a writer by trade. But he’s logged enough time in enough boats to make solid observations on things that fellow go-fast boat enthusiasts care about.

So by now you’re saying to yourself, “Big deal. So could I. Maybe I should write boat tests.” But what Johnson did with his first “boat test” was really clever. Anytime he made a major assertion about the DCB M-41 catamaran, he backed it up—with a video of the boat doing exactly what he said it did. That’s something you just can’t do with print, and it’s something Johnson plans to do with every test or review or first impression or whatever he calls them going forward.

Of course, he’s going to have to carefully pick and choose where to provide the video support in each story. Otherwise, he’ll end up with a tired, predictable and choppy format not unlike the one that inspired him to create something different for his own site. But in combining print, albeit electronic print, with video and—at the bottom of his first story—a slew of still images, he has taken a fresh approach to a format that desperately needed one.