As poker runs go, the Florida Powerboat Club’s annual trek to Key West in early November is not for the faint of heart. First, it takes all day to make the 170-mile journey from Miami to the nation’s southernmost city. Second, despite that much of the course sticks to the Intracoastal Waterway, the final leg takes the fleet into the Atlantic Ocean, which can be a bit unruly this time of year. And, unless you have a driver pull your trailer to Key West, you get to repeat the journey in the opposite and often-rougher direction when it’s time to head home.

In short, tackling the Key West poker run is a commitment—one that a record-setting 260 high-performance catamaran, V-bottom sportboat and center console owners were willing to make earlier this month.

“We had 270 boats on the roster, but 260 or so actually made it for the event,” said Stu Jones, the president of the Florida Powerboat Club.

With the largest event in the history of his Pompano Beach, Fla., organization on his hands, Jones knew he had to modify his traditional plan, which includes Wednesday and Thursday departures and—in the past few years—two lunch stops for each departure group. Wednesday saw 70-plus boats depart Miami for Key West. On Thursday, approximately 190 boats made the journey.

This time around, there were five lunch-stop locations, as well as the option for club members to have lunch on their own, on both days. That took the pressure off traditional lunch destinations such as Gilbert’s in Key Largo, which can become a raft-up nightmare with anything more than 50 boats. Boat companies including Cigarette, MTI and Nor-Tech had their own lunch-stop venues.

“Also, if people decided it was too crowded and they didn’t want to deal with it, they could skip it, have lunch on their own,” Jones said. “They could return their lunch tickets for a credit with the club.”

Lunch stops included two locations at the Faro Blanco Resort in Marathon, Playa Largo, Gilbert’s and—new for the event this year—the Sundowner. That translated to more than 800 lunches served on Thursday.

“We fed a lot of people,” Jones said, then laughed. 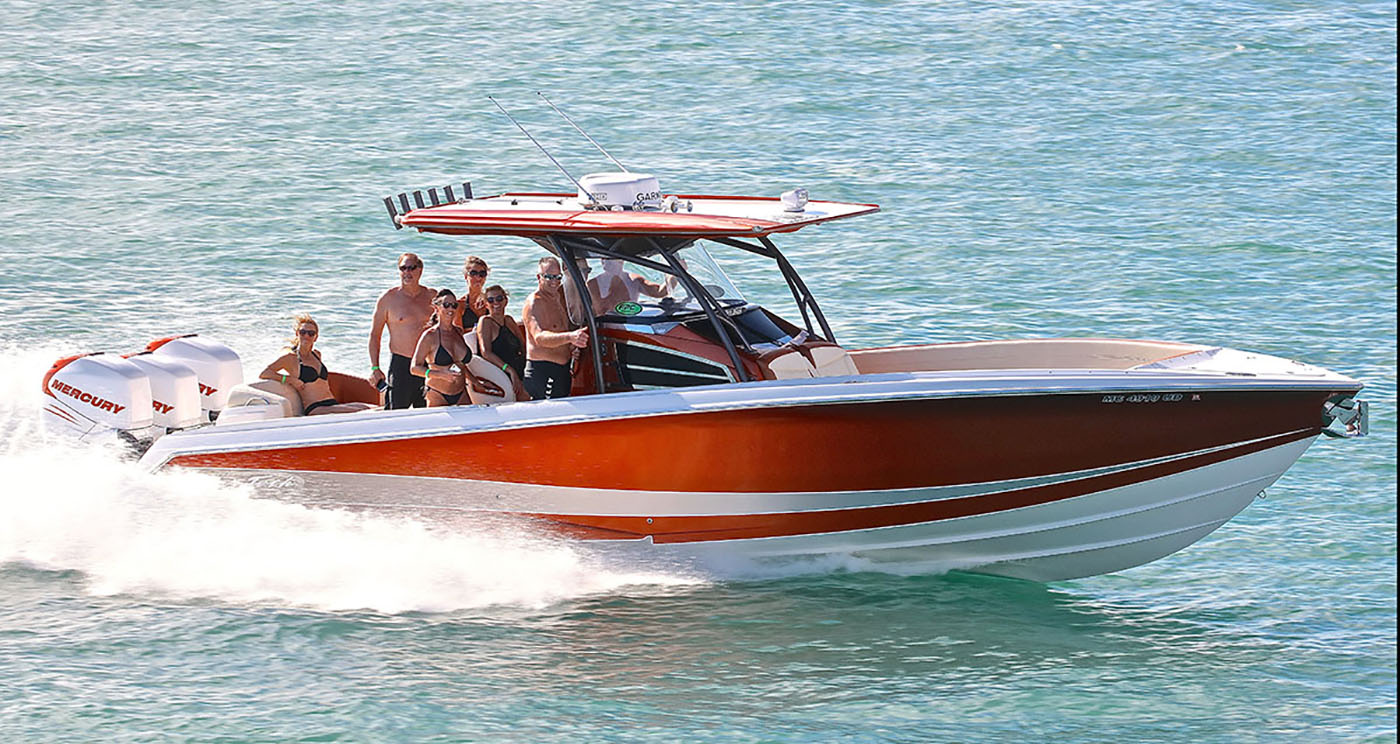 Nor-Tech and other boat builders that had their own lunch during the Thursday wave of the Key West event.

Unchanged was the club’s safety plan, which translated to Jones working closely with multiple law enforcement agencies including Florida Fish and Wildlife and the water-borne extensions of local fire departments to ensure safety assets were in place for the duration of the 170-mile run on both days. Also unchanged were Jones’ sometimes lengthy but still-crucial driver safety meetings—the night before each wave departed—to emphasize the club’s 10-point safety guidelines for all of its events.

The only reported incidents occurred when a few captains—hoping to skip the final Atlantic Ocean leg of the run by continuing on the Intracoastal Waterway—ran their boats aground. Tricky and shallow as the protected waterway is in the area, Jones said he advised all participants against trying to navigate it, especially on their own.

“You have to respect the Keys—you can’t just break off in your own group and think you are going to get there safely,” he said. “Part of joining the club means you get to take advantage of our experience and expertise. But all the people who got stuck on sandbars got off of them and used the tow-boat instructions we gave them—and off those sandbars for pennies rather than thousands of dollars as club members.”

Among the perennial challenges facing the Florida Powerboat Club’s poker run to Key West is dockage. In years past, the club has trouble to find space for 150 boats. With another 100 boats in need of safe harbor for a few days, the challenge dramatically increased. And yet with club members dispersing to multiple harbors—three alone on nearby Stock Island (which accommodated 75 boats) as well Key West Harbor, A&B Marina, the Galleon and more—the drama proved minimal.

“A lot of club members actually have drivers bring down their trailers so they can pull their boats out of the water when they get to Key West,” said Jones. “So they become a non-factor.”

For the 2020 event, Jones said he will retain the multiple-lunch-stop format. But he’ll add multiple staggered departure times on both days to break up the fleet into smaller, more manageable groups.

“That way, our members can enjoy the trip through the Keys in smaller, bite-size packages,” he said. “We learned a lot from this event, and we’re always looking to improve our overall program, from safety to lunch stops. We hit a number for our Key West run this year that we couldn’t have imagined when we started the club. We need to be able to manage that number without any excuses.

“So we’re changing our outlook going forward and revamping our whole program in some ways, and we’ll have more announcements on that as we go forward in 2020,” he continued. “Right now, we’re decompressing—and sorting through more than 8,000 images our photographer captured from a helicopter along the way.”