Between Matt Trulio’s column a few weeks back featuring reaction to the change in course length adopted by a few top-speed shootout events around the country, including the top-dog Lake of the Ozarks Shootout in Missouri, to the program stories I’ve been working on for both the Lake of the Ozarks event (August 26-27) and the Grand Lake O’ the Cherokees Performance Boat Challenge Shootout (July 13-16) in Oklahoma, I’ve been knee-deep in shootout conversations and I’m pretty amped up because of it.

Of course, the Desert Storm Poker Run Shootout that takes place a week from Saturday — the day after the popular Lake Havasu Ariz, City., poker run —i s the first one of the year and I’ve spoken with several participants gearing up to run on the one-mile course. From Win Farnsworth’s Low Altitude Mystic Powerboats catamaran, George Ogden in his updated E-Ticket Performance Boats 29 Luxury Cat and a great deal of DCB Performance Boats customers, the field for the only event that didn’t change to a three-quarter-mile course this year is expected to be strong. 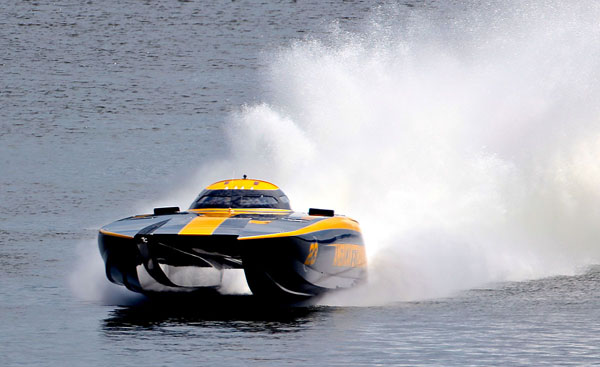 Don Onken’s American Ethanol team has a good chance of becoming the second team to claim three straight overall Top Gun titles at the Lake of the Ozarks Shootout—Dave’s Scott Nauti-Marine team did it from 2008-2010. Photos by Pete Boden/Shoot 2 Thrill Pix

The story that really got me excited to report this week was the power upgrade being put in place by the Onken Racing team’s 51-foot Mystic American Ethanol (read the story). Eager to test out their new-and-improved 2,250-hp engines at GLOC and at Lake of the Ozarks — last year the team ran four 1,700-hp engines in the boat — Don Onken’s team has been working hard to get the boat’s four 598-cubic-inch engines that run on Renegade Race Fuels’ E85 ethanol race fuel dialed in for the 25-percent-shorter courses.

Onken isn’t sure if the boat, which will be throttled by Mystic owner John Cosker and likely driven by Slug Hefner, can reach 200 mph on the new courses, but he said that’s the goal.

“We’re going to use GLOC as a barometer in July and then hopefully be able to do a little more testing before LOTO,” said Onken, adding that the team is going to use its 1,700-hp engines as spares for both events. “We may try to gear down a little more than before but I don’t know if we’ll need it with the horsepower we’ll be making. I’m hoping the boat can run 200 mph — with the power I think it could run 230 mph on a mile course — but it all depends on the equipment doing what it’s supposed to do.

While I’m not sure how much “real fast” competition there will be overall this season as some owners have opted to back out of top-speed shootouts following the tragic accident that killed Garth Tagge and Jim Melley last fall (read the story), I still believe it will be an exciting shootout season between Desert Storm, the Texas Outlaw Challenge, GLOC and Lake of the Ozarks.

I also believe that all of those events are going to lead to a lot of stories — and thinking about that makes me excited and tired at the same.