You are at:Home»Community»Young Senior Moment 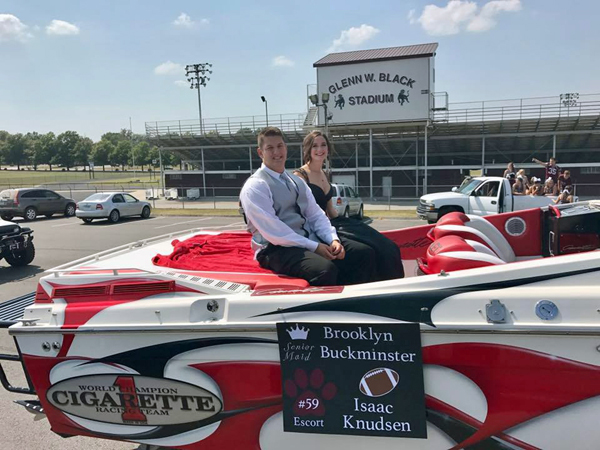 Being in the automotive parts and accessories business, Brian Buckminster of Siloam Springs, Ark., has access to a lot of cool cars. But when he asked his daughter, Brooklyn, a 17-year-old senior at Siloam Springs High School, what she’d like to ride in for last Friday evening’s homecoming game against local rival Van Buren High School, she opted for something different. She asked her father if she could ride in the family’s 1989 Cigarette Bullet sportboat.

And so, towed by a truck, the vintage 31-footer—restored to perfection by ace Cigarette restoration man Dustin Carter—carried Brooklyn Buckminster and senior football player Issac Knudsen in the parade.

“I have always been around boats with my family,” said Brooklyn Buckminster, who heads to Rogers State University in Oklahoma next fall on a soccer scholarship. “I thought, why not do something different? My dad works in cars and stuff. I told him I had this idea, and he thought it was really cool.” 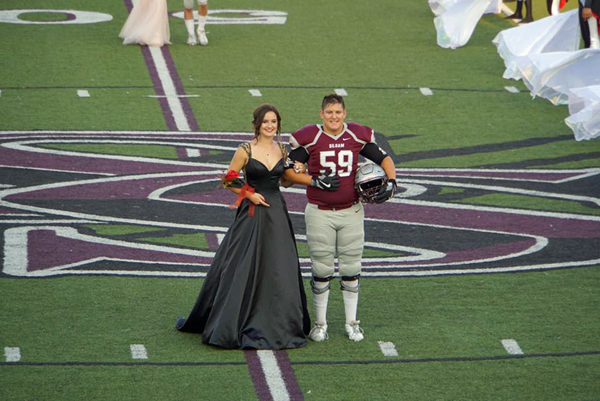 For the two high-school seniors, the thrill of moment was matched by the journey to it.

She paused for a moment to giggle before she continued. “It was something different,” she said. “No one had really done that before in our homecoming parade. All the little kids we went by were saying, ‘I love your boat.’”

While Brooklyn’s father was delighted with her choice of homecoming rides, he wasn’t surprised. Boating has long been a summer weekend passion for the family, which includes his wife, Renee, and his other daughter, 20-year-old Bentley.

“I couldn’t be more proud and happy,” he said. “I’m thrilled that she enjoys what we do together as a family, and that it’s something she appreciates. I have always told people that what we love about boating is having the kids with us.

“If they want to stay at someone else’s house for the weekend and find out we’re going boating, they cancel their plans and come with us,” he continued. “They want to spend time on the boat. Of course, their friends can always come with us.

“Summers are short here,” he added. “There are just 12 weekends, and they are going to enjoy every minute of them.”

And this year, Brooklyn Buckminster can add a unique Friday night homecoming parade experience to her boating season.