When the opportunity arose to sell the Mercury Racing 1075SCi engines from their Outerlimits Offshore Powerboats SV 43 dubbed Kahuna, John and Julie Tokar of Michigan didn’t hesitate. John Tokar, a diehard performance boater, had been kicking around the idea of upgrading the power in his 43-foot canopied V-bottom for some time, so selling the boat’s original power plants was a step in the right direction.

The only problem was he had to forego a season of using his beloved boat, which, after being reunited with the 43-footer and its new turbocharged dual-calibration Mercury Racing 1350/1100 engines earlier this summer, didn’t end up being that big of an issue.

“It was so worth the wait,” Tokar said. “The engines are amazing and the boat’s acceleration is insane now. We had Kahuna up at the Boyne Thunder Poker Run, and it performed incredibly well. So many people were excited to see the boat, too, which was cool.

“Working with Performance Boat Center was such a smooth process—I’d highly recommend those guys,” he added. “They stuck to their numbers and they did a really good job with everything we wanted them to do.” 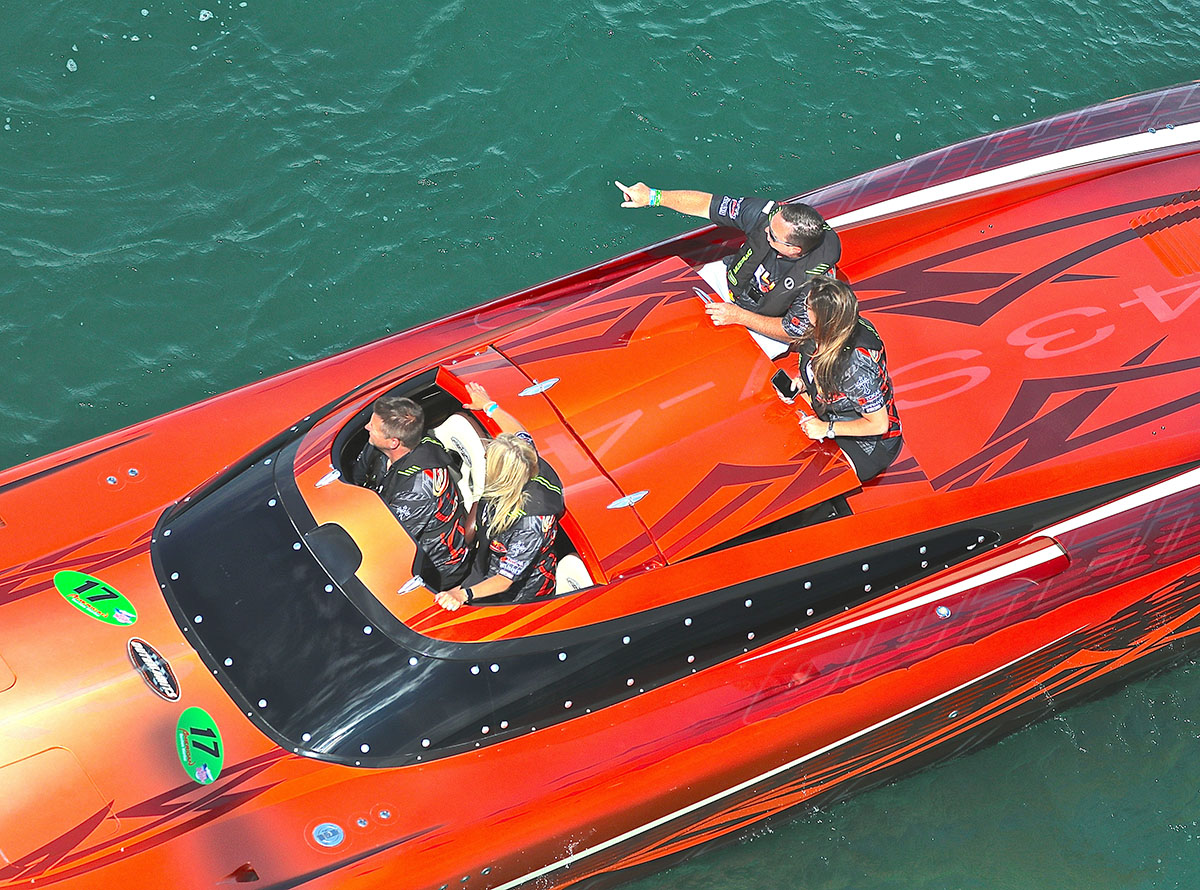 Michigan’s John and Julie Tokar had a blast showing off their new-and-improved 43-foot Outerlimits V-bottom at the Boyne Thunder Poker Run a couple of weeks ago.

Tokar said he’s had the boat to 150 mph, although he hasn’t had much time to to play around with different propellers. Currently he’s using 37”-pitch propellers connected to the No. 6 drives that previously put the power from the 1,075-hp supercharged engines to the water.

“Even at 120 or 130 mph, you can punch it and it throws your head back in the seat,” Tokar said. “It feels like the whole boat torques and just takes off. Julie loves it; although she jokingly said after getting it back, ‘So is that what retirement looks like?’ I have a feeling we’re really going to enjoy the boat.”

Tokar plans to take the boat to the Outerlimits Factory Fun Run in Rhode Island next week (Aug. 9-10), the Lake of the Ozarks Shootout later in the month (Aug. 22-25) and the Lake Cumberland Poker Run a couple of weeks later (Sept. 6-8). 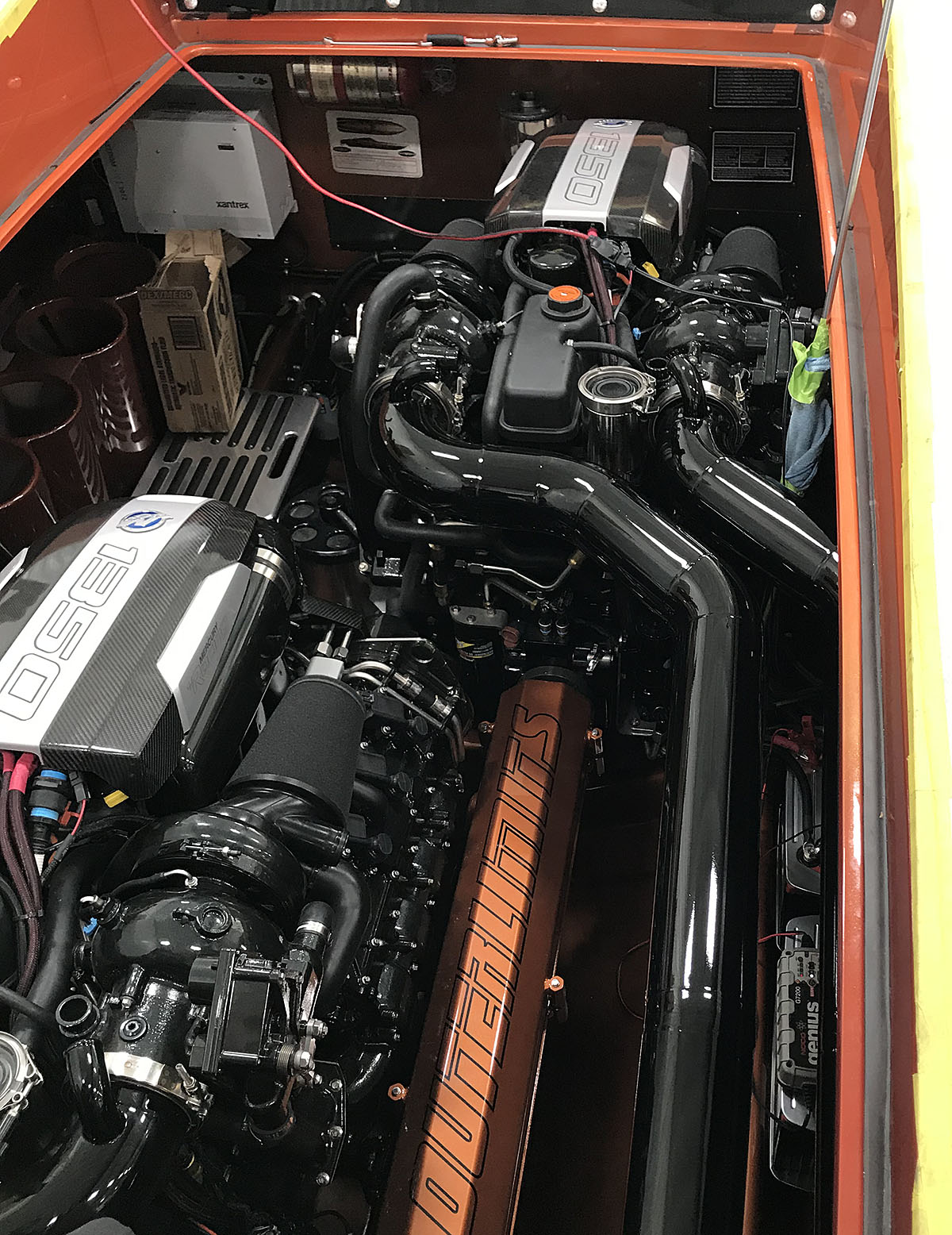 The team at Performance Boat Center in Central Missouri handled the updates to the 43-footer, which included new dash panels and a complete re-rig to accommodate the Mercury Racing 1350/1100 engines. Photo courtesy Myrick Coil

Performance Boat Center’s Myrick Coil, who oversaw the project with lead rigger Andy Sanders, was enamored with the boat’s performance even though he didn’t get an opportunity to run the 43-footer in 1350 mode before Tokar took delivery from the Osage Beach, Mo., dealership and service center in early June during the Lake Race festivities.

“In our first real test in Kahuna, we ran 140 mph with three guys and half a tank of fuel—and that was in 1100 mode, which is what blew me away,” Coil said. “John seems to love how it turned out. I’m proud of our guys, they did a great job with the project. It really was a fun boat to work on. Andy loves that thing. When it came here, he was so excited. He’s been a fan of that boat since the beginning. It’s a pretty cool feeling, whether it’s me or someone else, when you’re working on a boat that you’ve always admired.”

Coil said they received the boat from Tokar without engines in the winter, and Sanders and his team went to work on rigging the boat from there. Along with installing the all-black dual-calibration engines, they made custom driveshaft covers and mocked up all the exhaust for the new CMI headers, which had a custom all-black matte finish as well. 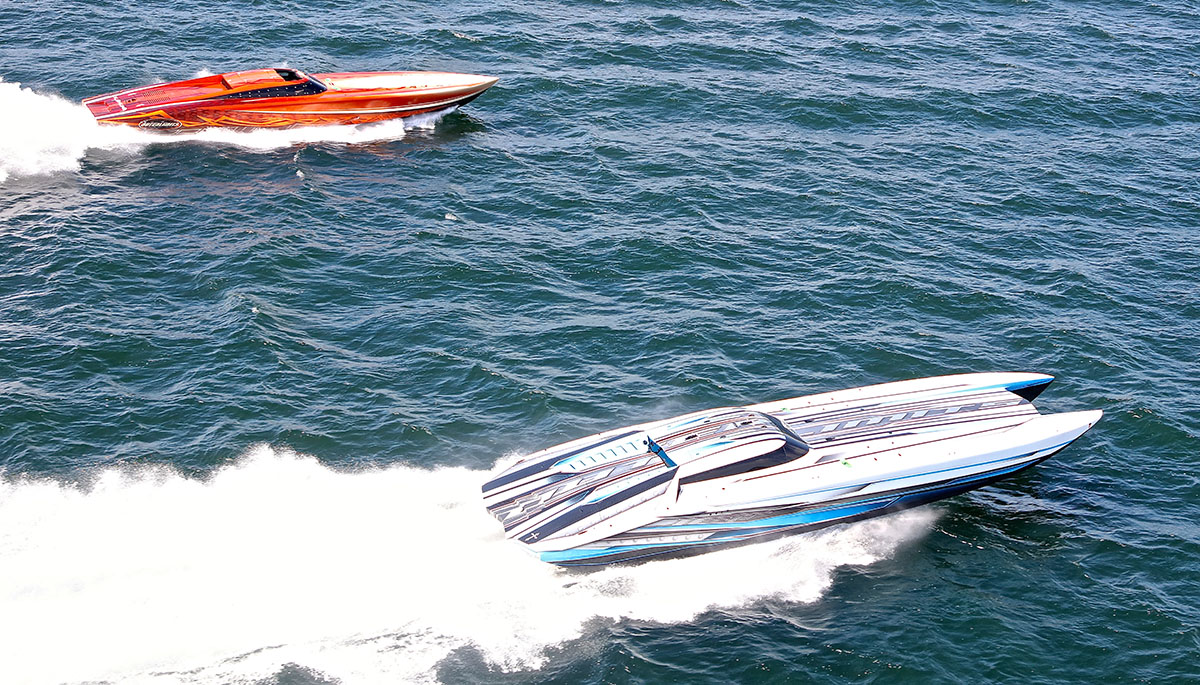 “We installed a new inverter and a larger air-conditioning and heater system that should work way better than what was in the boat before,” Coil said. “We added new dashes from Innotech and installed new Garmin GPS screens. Everything is fully integrated now with Mercury SmartCraft and DTS (Digital Throttle & Shift) technology, which is a huge difference maker.

“We took pretty much everything out of the boat and replaced it,” he added. “The fuel lines are bigger, the hoses are all black braided lines and we ordered a bunch of stainless-steel fittings from Teague Custom Marine.”

It might be a stretch to call not the updated boat “a dream come true,” for the Tokars, but the statement isn’t that far off considering how excited they are about the finished product. One thing’s for sure, I’m excited for John and Julie, who I’m happy to call friends. I’m also excited to possibly catch a ride with them during the Shootout in a few weeks. If you don’t remember my column “Officially Captain Morgan Now” from a little more than a year ago, they let my daughter drive their 32-foot Monterey at the 2018 Boyne Thunder Poker Run. So maybe they’ll let me drive Kahuna? Now that would be a dream come true.